If you read the feature on Dan, you see he’s a talented artist.  He was my student during my early years of teaching, and he was in my very first classroom.  The room had no windows and its cinder block walls were covered in egg-shell paint.  It was one big ol’ box o’ boring!

So, I asked Dan to paint three large ‘frames’ on the wall, and I enlisted him and two other student artists to fill the frames with artwork inspired by a quote of their choosing from a long list of quotations I provided.

My pics of the project are buried in a box, but Dan’s dad was able to dig this out and scan it for us.  I recall that Dan was tinkering around with an airbrush at the time, which he’d never used before, and that he’d never done a mural before.  As he ventured into my room each day after school, I was most impressed with his perseverance, patience and care.  And it was a blast for me to watch a young artist and his work take shape.  The kid had talent! 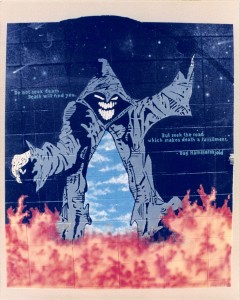 And it’s not everyday you get your Dag Hammarskjold fix!

(And, lest you’re concerned, the other two works were not as ‘grim’….)